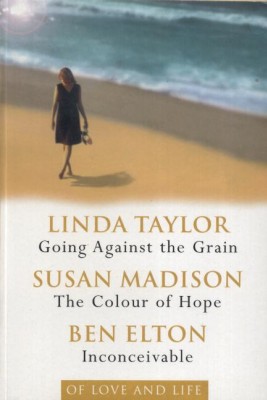 Linda Taylor – Going Against the Grain
Louis isn’t sure where her life took the wrong turning, but it’s not shaping up as well as she might have hoped. She’s just turned thirty-two, her job as a party planner – the latest in a long line of occupations – might kindly be described as not her natural forte, and she watches helplessly as her dynamic elder sister charges up the career path. The only road Louise seems to be on is the one paved with good intentions. Scatty, disorganised, bad at co-ordinating her wardrobe, Louise resolves that it’s time to get it together – even her boyfriend is part-time. But then she discovers she’s succeeded at one thing: getting pregnant.

Susan Madison – The Colour of Hope
Ruth Connelly, a high-powered partner in a corporate law firm, and her hostile, resentful 16-year-old daughter, Josie, have been at each others’ throats in a loud and painful conflict. Things aren’t great between Ruth and Paul, her husband of nearly 20 years, either. A part-time visiting professor working on a book, Paul has been drinking too much, and both he and Ruth have had affairs.
Summering in Maine at a house that’s been in Ruth’s family for more than 150 years, the family aims to unite by sailing to a nearby island for a picnic to celebrate sweet son Will’s 14th birthday. But when the family embarks for home, a sudden storm capsizes the boat, and Josie disappears. All three surviving family members blame themselves and one another for the girl’s death. Ruth, unable to grieve, loses herself in work, going to England for a few weeks to work on an important case. Upon her return, Paul announces he’s leaving her. And as if this family hasn’t suffered enough fracture and devastation, Will’s health deteriorates; when he’s diagnosed with acute lymphoblastic leukemia, Ruth and Paul need each other’s support to face the rigorous course of chemotherapy prescribed for Will.
They gradually reunite, and Ruth comes to terms with losing her daughter. But then a shocking twist of fate occurs to put the Connellys into yet another tailspin. Legal wheeling-and-dealing and a few overlong boardroom scenes slow down the pace occasionally, but this domestic drama is otherwise so skillfully crafted and smoothly written that even a plot development that strains believability doesn’t destroy its absorbing effect.

Ben Elton – Inconceivable
Whenever Sam thinks about babies, he envisages rivers of vomit and sleepless nights. But wife Lucy can’t walk past Mothercare without crying. What’s more, she can’t seem to conceive–not by traditional methods, anyway. Hippy confidante Drusilla suggests an array of New Age remedies, including the intimate use of nutmeg oil and al fresco lovemaking. As Lucy faces a possible verdict of infertility, her love for Sam enters tailspin, accelerated by the advent of arrogant actor Carl Phipps. Meanwhile Sam, desperate to escape his tedious BBC job, conceives the inconceivable–turning the intimacies of their battle for babies into an acclaimed movie script.
Inconceivable tells a poignant and heart-rending story with Elton’s trademark wit, creating a novel that is entertaining and emotionally satisfying; as explosive as Popcorn and with the incendiary humour of Blast From the Past. It courageously tackles its central theme from both the male and the female points of view, and while delivering laughs on every page, it steers clear of laddish clichés. Lucy’s tale, though pregnant with unfulfilled emotion, never stints on humour. "There seem", she fumes, "to be more urban myths attached to infertility than there are to … film stars filling their bottoms with small animals."
Aside from the rich vein of gags about DIY conception (Sam has to leave a power lunch with the excuse: "Sorry, my wife is ovulating …"), Elton also subjects the TV industry to relentless stand-up-style bombardment, giving birth to some brilliant asides, which enrich the main story but never overpower it. Funny, tragic, true and ultimately heart-warming, this book should be available on the National Health Service.