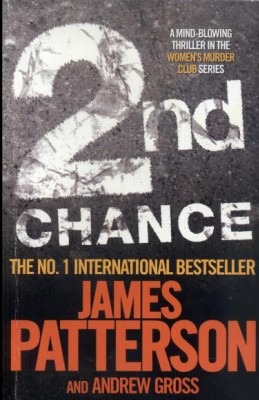 2nd Chance reconvenes the Women’s Murder Club, four friends (a detective, a reporter, an assistant district attorney, and a medical examiner) who used their networking skills, feminine intuition, and professional wiles to solve a baffling series of murders in 1st to Die.

This time, the murders of two African Americans, a little girl and an old woman, bear all the signs of a serial killer for Lindsay Boxer, newly promoted to lieutenant of San Francisco’s homicide squad. But there’s an odd detail she finds even more disturbing: both victims were related to city cops. A symbol glimpsed at both murder scenes leads to a racist hate group, but the taunting killer strikes again and again, leaving deliberate clues and eluding the police ever more cleverly. In the meantime, each of the women has a personal stake at risk — and the killer knows who they are.

2nd Chance speeds along at a Formula One pace through many tight curves,but unlike recent entries in the Alex Cross series, it doesn’t sacrifice good characters to a twisted plot. Lindsay’s the star, but there’s a fine esprit de corps among the four women, who are even better developed here than in the first book. What makes them both convincing and interesting as a criminal-justice juggernaut is their willingness to stick theirnecks out, even if they suffer for it.