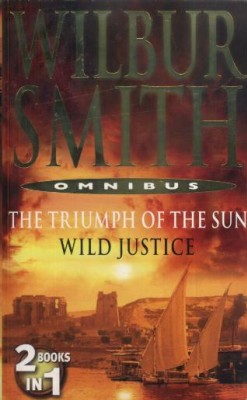 The Triumph of the Sun
They’ve come from out of the shifting sands and down from ancient mountains. Mounted on horse and camel, carrying gleaming swords and plundered rifles, the sons of Allah are led by a holy warrior imbued with jihad, driving his army of thousands to wipe out the last Englishmen from the isolated Nile city…
But in Khartoum is a legendary British general, a brilliant, mercenary trader, a beautiful woman and a courageous soldier whose fates have become one. They know that time is running out and rescue is improbable. So they prepare for one last stand–and the beginning of an epic journey of survival…
From a passionate rivalry for a woman to an unforgettable face-off between warriors, TRIUMPH OF THE SUN is adventure fiction writ large—alive with the sounds of throngs, the terror of battle, and the mystical fire of human courage in the darkest moments of all.

Wild Justice
It begins as a routine trip to South Africa. It ends in a nightmare for 400 passengers taken hostage. The hijackers is a beautiful pawn for an elusive figure — codename Caliph, whose campaign of terror has just begun. And this man who rescued Flight 070 is the only man who can stop Caliph dead in his tracks.