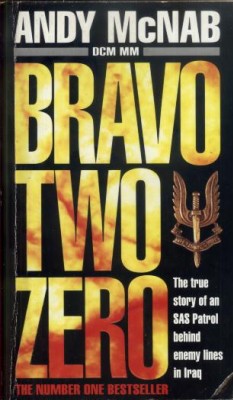 The true story of an SAS Patrol behind enemy lines in Iraq. Their mission: To take out the scuds. Eight went out. Five came back. Their story had been closed in secrecy. Until now. They were British Special Forces, trained to be the best. In January 1991 a squad of eight men went behind the Iraqi lines on a top secret mission. It was called Bravo Two Zero. On command was Sergeant Andy McNab.

"They are the true unsung heroes of the war." — Lt. Col. Steven Turner, American F-15E commander. Dropped into "scud alley" carrying 210-pound packs, McNab and his men found themselves surrounded by Saddam’s army. Their radios didn’t work. The weather turned cold enough to freeze diesel fuel. And they had been spotted. Their only chance at survival was to fight their way to the Syrian border seventy-five miles to the northwest and swim the Euphrates river to freedom. Eight set out. Five came back.

"I’ll tell you who destroyed the scuds — it was the British SAS. They were fabulous." — John Major, British Prime Minister. This is their story. Filled with no-holds-barred detail about McNab’s capture and excruciating torture, it tells of men tested beyond the limits of human endurance… and of the war you didn’t see on CNN. Dirty, deadly, and fought outside the rules.