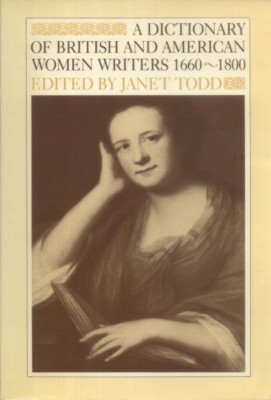 Noise they may have not made, but despite repressive attitudes towards female assertiveness, women writers flourished in every stratum of eighteenth-century society — aristocratic, and middle class — through an extensive network of female, and occasionally male, patronage.

The years 1660 to 1800 were an extraordinary period in the history of feminine authorship. Writing became for the first time a respectable occupation rather than a sign of loose morals. These fascinating biographies show that many gifted women, while adapting to the constraints of eighteenth-century life, led unusual, often independent, and occasionally flamboyant lives as struggling novelists, actresses and playwrights, male impersonators, royal mistresses, or persecuted Quaker preachers.

This dictionaty, the first of its kind, describes the lives and contributions of almost 500 women writers, seen in the new light of recent scholarship and of more liberated consciousness. Each entry is intended to entertains as well as to inform. Students and scholars will appreciate plentiful material for sociological study and the tracing of women’s genres and themes. All readers will enjoy the rich texture of feminine life imagination in a period when women first articulated their particular needs. Most important, this much-needed volume provides a strong foundation for further scholarship in the burgeoning field of women’s studies.