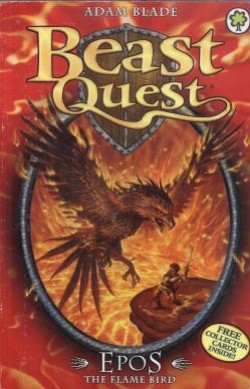 ONE BOY’S JOURNEY TO HELP HIS VILLAGE BECOMES A QUEST TO SAVE THE KINGDOM.

THE ENTIRE BEAST QUEST HAS BEEN LEADING UP to the final battle. Tom is ready to defeat the last of Malvel’s Beasts: the Winged Flame, a phoenix living inside a volcano! And though his friends have been there to help him along his Quest, he must ultimately go forward to face the final Beast alone.

But Tom has more to worry about than Epos. As he struggles to free the Beast and defeat the dark wizard Malvel, Tom learns more about his mysterious father — and his own destiny as well.