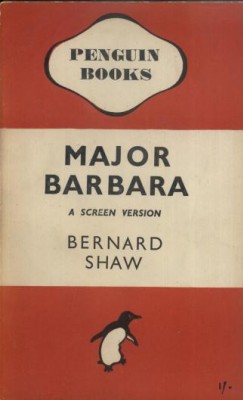 Fabian socialist and ardent proselytizer, George Bernard Shaw viewed his role as a playwright as far more than that of an entertainer. His audiences heard fully articulated sermons on moral and economic issues, a potentially dry theatrical experience enlivened by Shaw’s genius for creating vital characters and scintillating dialogue.

Major Barbara offers a sparkling example of its author’s unique gift for presenting social theories in an engaging format. The eponymous heroine, an officer in the Salvation Army, is the daughter of Andrew Undershaft, a wealthy armaments manufacturer. When the Army accepts donations from Undershaft and a whiskey distiller, whose money Barbara regards as tainted, she resigns in disgust, but eventually sees the truth of her father’s reasoning that social iniquity derives from poverty; it is only through accumulating wealth and power that people can help each other.