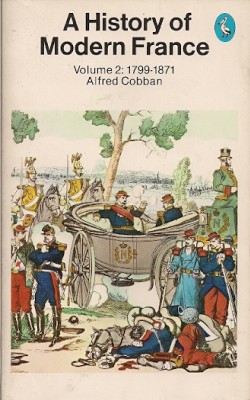 This second volume begins with the refashioning of French laws and institutions under Napoleon Bonaparte in 1799 and ends with the Commune of Paris in 1871. While there is an ample supply of facts, this book devotes more attention to the great turning-points of the period aiming not to force agreement wih his own interpretation but rather to stimulate readers to ask their own questions and formulate their own judgements.

CONTENTS:
1. THE FIRST EMPIRE
France in 1799
From Consulate to Empire
Napoleonic Foundations of the Nineteenth Century
The Napoleonic Empire: Rise
The Napoleonic Empire: Fall
2. THE CONSTITUTIONAL MONARCHY
The Restoration
Clericalism and Anti-Clericalism
The Foundation of the July Monarchy
An Age of Idealism
3. THE SECOND REPUBLIC AND THE SECOND EMPIRE
1848: From the February Days to the June Days
The Triumph of Louis Napoleon
A Burgeois Empire
L’Empire c’est la Paix
Towards the Liberal Empire
The Price of Dictatorship
Plus ca Change