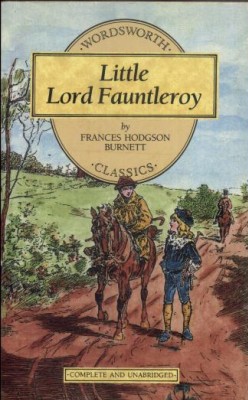 Published in 1886, the story begins with young long-curly-haired Cedric Errol living in New York with his widowed mother. After inheriting a title and estate, he moves to England, charming all he meets, doing good deeds for those in high and low positions, and encountering plenty of adventures (including a rival claim to his estate) along the way.

In a "shabby" "New York side street" in the mid-1880s, young American Cedric Errol lives with his mother (never named, known only as Mrs. Errol or "Dearest") in genteel poverty after his father, Captain Errol (whose first name was also Cedric), dies. They receive a visit from Havisham, an English lawyer with a message from young Cedric’s grandfather, the Earl of Dorincourt. With the deaths of his father’s elder brothers, Cedric is now Lord Fauntleroy and heir to the Earldom and a vast estate. The Earl wants Cedric to live with him and learn to be an English aristocrat. The Earl despises America and was deeply disappointed with Captain Errol, his favorite son, for marrying an American. So he offers Mrs. Errol a house and income, yet refuses to meet or have anything to do with her, even after she declines the offer of the money.

However, the crusty Earl is impressed by the appearance and intelligence of his young American grandson, and charmed by his innocent nature. Cedric, a trusting child, believes his noble grandfather to be a great benefactor, and the Earl cannot bear to disappoint his loving grandson. Thus, the Earl acts as a benefactor to his tenants (as the local populace notices to their delight).

A pretender to Cedric’s inheritance appears, his mother claiming that he is the son of the Earl’s eldest son, but the claim is investigated and disproved with the assistance of Cedric’s loyal friends in New York, one of whom — a bootblack called Dick — recognizes the mother as the missing wife of his brother Ben, and her son (the alleged heir) as his own nephew. The Earl is reconciled to his son’s American widow after meeting with the other boy’s mother, recognizing that, despite his preconceptions and prejudices, "Dearest" is a far superior woman to the alternative.

The Earl had intended to teach his grandson how to be an aristocrat; however, Cedric inadvertently teaches his grandfather that an aristocrat should practice compassion towards persons who are dependent on him. The Earl becomes the kind and good man Cedric always innocently believed him to be. Cedric’s mother is invited by the Earl to live in the ancestral castle, and Cedric’s old friend Mr. Hobbs, the New York City grocer, who came to England to help investigate the false claim, decides to stay to help look after Cedric.