Castle Barebane (the sinister tale of murder, mystery and suspense in a deserted family mansion) 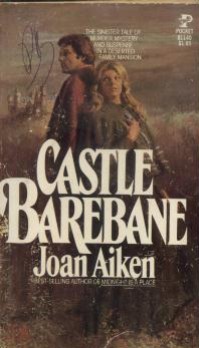 Castle Barebane (the sinister tale of murder, mystery and suspense in a deserted family mansion)

Near the top of a three-hundred-foot crag perched a roofless ruin with crumbling battlements and shattered buttresses….Apart from the ruined castle there seemed to be no other sign of human life, unless you counted a couple of fishing boats well out to sea….

Val Montgomery, young, warm-hearted, and confident — but no lady, according to the grande dames of New York in the 1880’s — had abandoned a promising job on a newspaper and a claustrophobic engagement to a society lawyer and sailed to England to help her spendthrift half-brother, Nils, whose Scottish heiress wife, Kirstie, had fallen ill.

Arrived in a London terrorized by a series of lurid murders, Val can find no trace of Nils or Kirstie. Horrified, she discovers that her small nephew and niece seem to have been callously abandoned in a London slum. Seeking a safe domicile for the children, Val travels to Edinburgh, intending to leave them with their mother’s old nurse at Ardnacarrig, the family home on the Scottish coast — but she soon begins to doubt that old Elspie is the loving guardian she had hoped for.

In the quest for her brother, Val encounters four men destined to change her life forever: Lord Clanreydon, slated as England’s next prime minister — a man of mysterious origins and enigmatic habits; Sir Marcus Cusack, an editor who befriends her; Davie, a brilliant young Scottish doctor; and Mungo, an old sailor. Soon the apparent peach of Ardnacarrig (known as Castle Barebane by the locals) is threatened by dark emanations from London’s underworld, and Val begins to apprehend that it might be better for all if Nils were never seen again.

But her realization comes too late. Guilty and innocent alike are whirled in a wild eruption of violence as events more quickly to a terrifying climax in a savage confrontation between the forces of good and evil on the cliffs of Ardnacarrig.

In this, her most compelling and suspenseful novel to date, Joan Aiken has created a variety of memorable characters: from the deserted children and their hostile great-aunt, the Marchioness of Stroma, to cab drivers and sailors, London clubmen and music-hall singers.