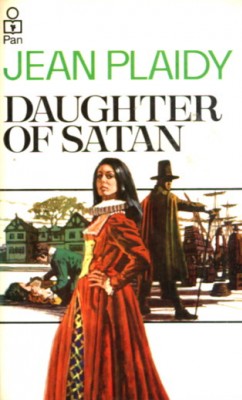 Even Tamar’s mother believed that the child had been forced on her by the Devil when, against her judgement, she was persuaded to attend a midsummer sabbat of witches. In a world of superstition and intolerance, Tamar, growing into a wild and beautiful girl, seemed doomed to violent death when the witch-pricker came to Plymouth. Intelligent though untutored, she attracted the attentions of Bartle Cavill, the lusty gentleman-adventurer, home from the Spanish Main: moreover the puritan Humility Brown, was not unaware of her.

These two men attracted her as she attracted them, but for different reasons representing as they did, the one passion, the other piety. Daughter of Satan is a moving and exciting novel of fanaticism and persecution, of witches and puritans, of a band of exiles who, because life was becomingly intolerable for them at home, were ready to cross and ocean to face storm and tempest, pirates and savages-even the Spanish inquisition-that they might seek refuge in a new land. From Old Plymouth to New Plymouth in search of a new life, came Tamar, the passionate pilgrim, the woman whom many believed to be the daughter of Satan.