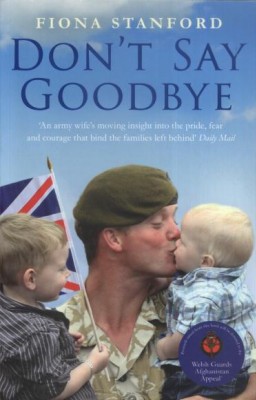 When you fall in love with someone serving in the Armed Forces, it’s hard to imagine the impact their career will have on your life. In Don’t Say Goodbye, Fiona Stanford tells the untold story of the people left behind when our soldiers go off to fight. She reveals the hidden side to modern conflict – the story of the families, but in particular the wives, girlfriends, mothers and children – how it feels to live on a knife edge, bombarded with 24-hour news and footage of the war, and the constant terror that the next death you hear about on the television or the radio might be your loved one. Through tales of the Army lifestyle, she explains the reply to the age old question: 'How do you cope?’ which is usually: 'You just get on with it’

Fiona’s husband handed over command of the 1st Battalion Welsh Guards to Lt Col Rupert Thorneloe before they deployed to Afghanistan in 2009. During the tour seven of their men were killed, including Rupert, and many were wounded.

Here she shares the rewards and challenges of Army life – the desperate goodbyes with young children in tow, the bittersweet sense of pride and the huge relief of homecoming. She also tells of other goodbyes; to friends when 'posted on’, to children when they go away to school and the ultimate goodbye, revealing the heartache of families whose loved ones do not return.

This is a story of love – how love can survive and even grow when couples are separated by thousands of miles and days of anguish. Don’t Say Goodbye sheds light on the unique camaraderie that develops amongst the women as they pull each other through the toughest of times. Poignant, inspiring and deeply moving, this book is a tribute to the women and families that support our heroes on the frontline.