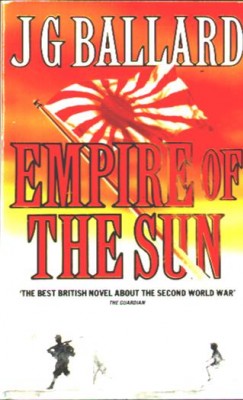 Jim is separated from his parents in a world at war. To survive, he must find a strength greater than all the events that surround him.

Shanghai, 1941 – a city aflame from the fateful torch of Pearl Harbor. In streets full of chaos and corpses, a young British boy searches in vain for his parents. Imprisoned in a Japanese concentration camp, he is witness to the fierce white flash of Nagasaki, as the bomb bellows the end of the war … and the dawn of a blighted world.

In EMPIRE OF THE SUN J. G. Ballard has produced a mesmerizing, hypnotically compelling novel of war, of starvation and survival, of internment camps and death marches, which blends searing honesty with an almost hallucinatory vision of a world thrown utterly out of joint. Rooted as it is in the author’s own disturbing experience of war in our time, it is one of a handful of novels by which the Twentieth Century will be not only remembered but judged.