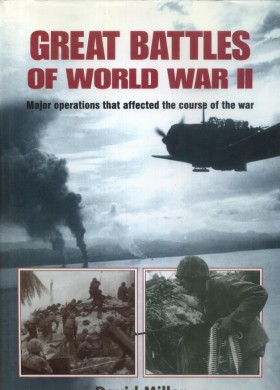 Noted historian David Miller has put together more than 200 black-and-white and full-color photographs, as well as battle maps, to accompany his compelling collection of 50 accounts of the major conflicts that changed the course of World War II. There are background facts and quotes from major participants in Dunkirk, the Battle of Britain, Midway, Stalingrad, Salerno, and many other important battles fought on all fronts — land, sea, and air.

– Gripping stories of epic and significant battles, on land, at sea and in the air, during the largest, most destructive conflict the world has known
– U-boats in the Atlantic… Battle of Britain… Stalingrad… Pearl Harbour… Midway… Sicily… El Alamein… D-Day… Arnhem… Guam… Kursk… and many more…
– Detailed accounts of battles, with tables of forces, losses and gains
– Over 150 action photographs, and maps