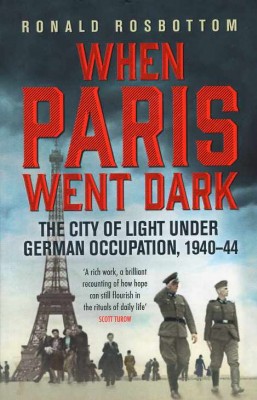 In May and June 1940 almost four million people fled Paris and its suburbs in anticipation of a German invasion. On June 14, the German Army tentatively entered the silent and eerily empty French capital. Without one shot being fired in its defence, the Occupation of Paris had begun.

When Paris Went Dark tells the extraordinary story of Germany’s capture and Occupation of Paris, Hitler’s relationship with the City of Light, and its citizens’ attempts at living in an environment that was almost untouched by war, but which had become uncanny overnight. Beginning with the Phoney War and Hitler’s first visit to the city, acclaimed literary historian and critic Ronald Rosbottom takes us through the German Army’s almost unopposed seizure of Paris, its bureaucratic re-organization of that city, with the aid of collaborationist Frenchmen, and the daily adjustments Parisians had to make to this new oppressive presence.

Using memoirs, interviews and published eye-witness accounts, Rosbottom expertly weaves a narrative of daily life for both the Occupier and the Occupied. He shows its effects on the Parisian celebrity circles of Pablo Picasso, Simone de Beauvoir, Colette, Jean Cocteau, and Jean-Paul Sartre, and on the ordinary citizens of its twenty arrondissements. But Paris is the protagonist of this story, and Rosbottom provides us with a template for seeing the City of Light as more than a place of pleasure and beauty.