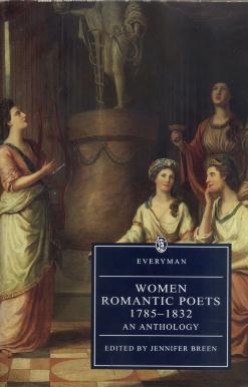 Part of the "Everyman" series which includes an introduction, chronology of the authors’ lives and times and summary of theme and style. The books also contain an annotated bibliography, selected notes and criticism. This presents poems by women of letters and working-class women.

Hidden from history: twenty-six women poets from an age and art dominated by men. The Romantic period usually brings to mind names like Shelley and Byron, but alongside them many women published poetry, only to be neglected by the critics and compilers of later ages. None of the writers included here is a household name, yet their work has survived and in this broad anthology reveals itself in its diversity and originality – from well-to-do intellectuals, such as Hannah Moore and Anne Hunter, to Ann Yearsley, a former dairymaid, and Charlotte Richardson, a cook and housemaid. In their depiction of Nature and in their adoption of domestic life as a fitting subject for poetry, Joanna Ballie’s pre-Wordsworthian plea for an everyday language found its everyday subject.