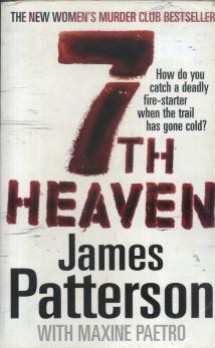 A VERY PUBLIC DISAPPEARANCE….
Michael Campion, the teenage son of California’s ex-governor, has mysteriously vanished. Known as the "Boy with a Broken Heart" because of his incurable heart defect, Michael grew up in the eye of an adoring public. The pressure on Detective Lindsay Boxer to find Michael is overwhelming. When she finally does get a lead, it’s devastating .

A DEADLY RASH OF ARSONS….
While working on the Campion case, Lindsay and her partner, Rich Conklin, also investigate terrifying fires that are destroying some of the most beautiful homes in San Francisco — and killing their owners in the flames. But when Lindsay invites her friends in the Women’s Murder Club to help her uncover the arsonist, the blazes suddenly start to rage much too close to home.

A CHANCE AT 7TH HEAVEN….
Now as these two intense, demanding cases bring Lindsay and Rich closer together than ever, Lindsay will find herself on the brink of an emotional meltdown.