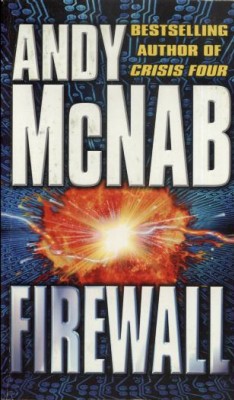 All freelances have problems when work dries up, but Nick Stone, hero of Andy McNab’s second adventure thriller Firewall has worse problems than most of us. Expensively trained by the SAS, he now works for British Intelligence as a deniable operative, and he needs a regular income to take care of his responsibilities, which include psychiatric care for a traumatised orphan.

He takes a lucrative mercenary job kidnapping a leading Chechen Mafioso; when the job goes sour, his victim is impressed by his grace under pressure and hires him to baby-sit a computer espionage expert on a jaunt into Finland. Not all is as it seems–Nick was engaged in wishful thinking to believe it was–and he finds himself adrift with little money and no weapons in Estonia in the dead of winter with a friend to rescue, the interests of the West to retrieve and, if possible, money to earn… This is an effective thriller because of the clash between its hero’s competence and his less than entire brightness–Nick gets himself into messes and then gets out of them because of skills in combat, disguise and survival.