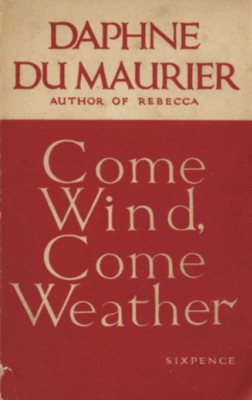 As Britain once more faces the danger of invasion, many people are earnestly asking themselves, is the spirit of Drake and Nelson and the other men who made the country great, still alive? Or has the mentality of "Safety First" eaten into the national life, and produced a mediocre breed of Englishmen?

"I believe that the old spirit of England still lurks in the hearts and minds of every man and woman in this island," says Miss Daphne du Maurier. And in this unusual book, the author of "Rebecca" turns from fiction to write the true stories of some of these ordinary people who, while following the common round of day-by-day, have given their best to England, and done deeds of gallantry in their respective spheres. The mother who triumphed over bereavement, the East London grocer bringing co-operation between his competitors, the miner settling disputes at the pithead, and the woman who learnt how to change her "impossible" evacuees into useful citizens – all were able to turn the difficulties and worries of war-time into opportunities to spread a spirit of victory on the Home Front.