I Wish I’d Never Said That: Everlasting Gaffes of the Famous 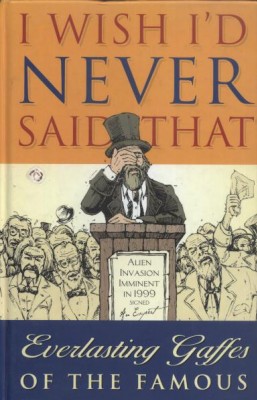 I Wish I’d Never Said That: Everlasting Gaffes of the Famous

Throughout history the temptation to pontificate and prophesy has been hard to resist. While some have been content to keep their pearls of wisdom to themselves, many have gone public with their insights and forecasts – and then been made to eat their words as history has proved them to be spectacularly wrong. I Wish I’d Never Said That is a tribute to those bold practitioners of misinformation – an hilarious celebration of inaccurate predictions and pronouncements.

From Dr John Lightfoot, Vice-Chancellor of Cambridge University, who asserted in 1859 that the act of Creation took place on 23rd October, 4004 BC at nine o’clock in the morning, to the more recent prediction of Martian invasion in July 1999, this book scans the horizon of human experience and follows the erratic course many have followed in their quest to advance our understanding.

In this book, you’ll encounter:
– the editor of business book who told his staff in the late 1950s the data processing was a fad that wouldn’t last one year
– the parliamentary committee which scoffed at the idea of electric lighting just four years before it illuminated New York City
– the Hollywood movie critics who, even before filming was completed, commented that Gone With the Wind was going to be "one of the biggest white elephants of all the time"
– the female MP who observed in 1969 that "no woman in my time will be Prime Minister" (her name was Margaret Thatcher)

Packed with glorious gaffes and ill-judged declarations, this book contains (if confirmation were needed) that "those in the know" can be just as fallible as the rest of us.