Private Island. Why Britain Now Belongs to Someone Else 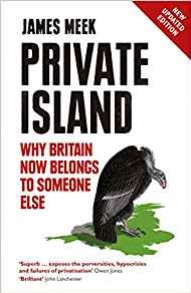 Private Island. Why Britain Now Belongs to Someone Else

In a little over a generation the bones and sinews of the British economy – rail, energy, water, postal services, municipal housing – have been sold to remote, unaccountable private owners. In a series of brilliant portraits James Meek shows how Britain’s common wealth became private, and the impact it has had on us all. In a series of panoramic accounts, Meek explores the human stories behind the incremental privatization of the nation over the last three decades. As our national assets are being sold, the new buyers reap the rewards, and the ordinary consumer is left to pay the ever-rising bill. Urgent, powerfully written and deeply moving, Private Island is a passionate anatomy of the state of the nation for readers of Chavs and Whoops!

“One activity in which Britain leads the world is privatisation. From Thatcher to Cameron, prime minister after prime minister has flogged off our public assets at rock bottom prices to the private sector. The result has been massive returns for investors and middle men, poorer services for the public – and a downgrading of our entitlements as citizens. All this is detailed by James Meek in a book that stands as one of the most powerful critiques of the mess that is Britain’s economy.”
– Aditya Chakrabortty