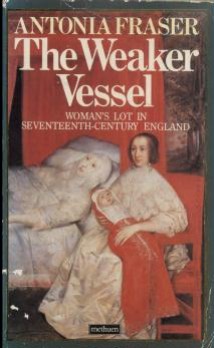 Antonia Fraser, one of the most popular and celebrated historians, here brings to life the women of seventeenth-century England. What was the effect on women’s lives of the social disruption caused by the Civil War? Did women’s education improve during the seventeenth century or was there some sinister degeneration? Was the lot of the heiress really so enviable compared to that of the dairymaid? Did anyone marry for love? Did divorce exist?

Above all, Antonia Fraser demonstrates through the life stories of particular women how, in an age when effective contraception was unknown and maternal mortality was high, childbirth dominated the life of every woman from the highest to the lowest. She considers these themes in terms of various female characters, both known and unknown, who include actresses, courtesans and whores, as well as educators, nuns, Quakers and businesswomen.

This brilliant, entertaining and moving book won the Wolfson Prize for History in 1984. By looking at women’s lot between the death of one reigning queen and the accession of another, it draws attention to the many changes which have affected women’s position in society since 1700. At the same time it illuminates those perennial issues about the fate of women which remain unchanged even today.