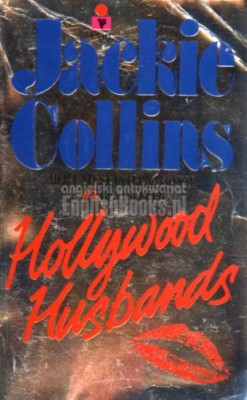 In a small American town, a pretty young girl is beaten by her husband, raped by his friends and left for dead. Years later in Hollywood, the Hollywood husbands may be the ones to feel the heat of her burning revenge…..

Top model Jade Johnson is independent, stylish and dangerously beautiful. When she arrives in LA, the Hollywood rat race leaves her cold. But as she enters the lives of studio head Howard Soloman, macho superstar Mannon Cable and Jack Python, the hottest talk-show host in America, she is drawn into a game which soon becomes a struggle for survival in which only the fittest will make it to the shattering climax.

"Her characters are as racy as Ferraris. Her plots fast-moving as Porsches….. HOLLYWOOD HUSBANDS is like a box of chocolates. You feel a bit guilty but, God, you enjoy it"       Jean Rook, Daily Express