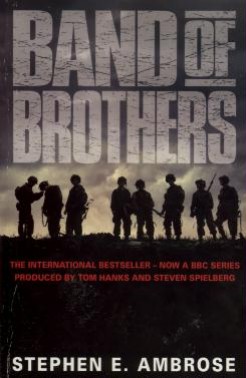 They came together in the summer of 1942. It was as good a rifle company as any in the world. Here is the story of E Company — men who went hungry, froze, and died for each other — from the rigorous training in Georgia in 1942 to their disbanding in 1945.

They fought on Utah Beach, in Arnhem, Bastogne, the Bulge; they spearheaded the Rhine offensive and took possession of Hitler’s Eagle’s Nest in Berchtesgaden. This gripping depiction of Easy Company re-creates some of the most critical moments of WWII and offers insights into the commanders and regular soldiers–the heroes who manned the battlefields.

Ambrose (Pegasus Bridge) narrates in vivid detail the adventures, misadventures, triumphs and tragedies of a single U.S. Army infantry company over its span of organizational life. Formed in July 1944 and deactivated in November 1945, E Company was one of the most successful light infantry units in the European theater. Its troops saw their first action on D-Day behind the Normandy beachhead, took part in Operation Market Garden in Holland, held the perimeter around Bastogne during the Battle of the Bulge, and were the first to reach Hitler’s Bavarian outpost at Berchtesgaden. The book is enlivened with pertinent comments by veterans of "Easy Company,” who recall not only the combat action but their relations with their officers (one company commander was a petty tyrant of the worst type, but his oppressive ways had much to do with the unit’s impressive esprit de corps ) and their impressions of the countries through which they campaigned (hated the French, loved the Germans). This is a terrific read for WW II actions buffs.