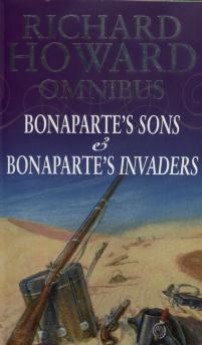 Bonaparte’s Sons
Set in France during the Napoleonic Wars, this is the first volume in a trilogy telling the story of a regiment of Napoleon’s soldiers recruited from the dungeons of the Bastille. Thrown together under the leadership of the ambitious Cezar, they are pronounced expendable.

Bonaparte’s Invaders
17,000 French troops leave Toulon harbour in May 1798 unaware of their ultimate destination. Barely 3 months after taking Rome, Napoleon Bonaparte has rewarded the finest regiments of that campaign with a place among the Army of Orient, the elite invasion force bound for Egypt. By the time the discontented ranks of Alain Lausard’s cavalry unit have staggered, starved and exhausted, upon the desert shores, his dragoons have more than glory to fight for. Worn down by the blistering heat, they summon unknown strengths to resist the Arab warrior raids that blight their path towards the Nile, but as they are drawn deeper into forbidding territory, despair and disease, Nelson’s destruction of the French fleet and Bonaparte’s obsessive war-mongering convinces Lausard he will never see Paris again.