Barefoof Soldier: The Amazing Story of Courage Under Fire 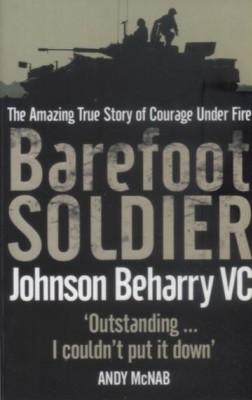 Barefoof Soldier: The Amazing Story of Courage Under Fire

Born in 1979 in Grenada as one of eight children, living in a two-bedroom hut, surviving on meagre meals of beans and rice and walking barefoot, three miles to school. At 13 Johnson Beharry quit school and worked as a decorator and labourer. In 1999 he scraped together the airfare for England and joined the Princess of Wales’s Royal Regiment. He served six months in Kosovo, three months in Northern Ireland and then went to Iraq.
On 1 May 2004, Beharry helped assist a foot patrol caught in a series of ambushes. His vehicle was hit by multiple rocket propelled grenades but he drove through the ambush and extracted his wounded colleagues from the vehicle, all the time exposed to further enemy fire. He was cited on this occasion for 'valour of the highest order’. While back on duty on 11 June 2004, a rocket propelled grenade hit Beharry’s vehicle incapacitating his commander and injuring several of the crew. Despite his very serious head injuries, Beharry took control of his vehicle and drove it out of the ambush area before losing consciousness. He required brain surgery for his head injuries, and he was still recovering when he was awarded the VC in March 2005.