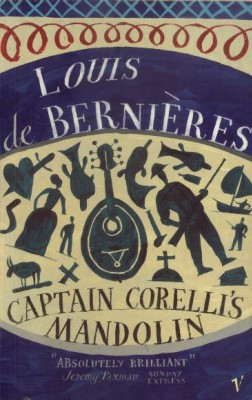 The Greek island of Cephallonia – peaceful, remote, famed for its beauty, its light, its mythic history – and only just beginning to enter the twentieth century when the tide of World War II rolls onto its shores. This is the setting for Louis de Bernieres’s lyrical, heartbreaking, and hilarious chronicle of the days and nights of the island’s inhabitants over fifty tumultuous years.

"It was an island filled with gods," writes Dr. Iannis, Cephallonia’s healer and fledgling historian. And though the people who fill the island in 1940 may be less divine than their Olympian forebears, they are nonetheless divinely human, and none more so than the doctor’s daughter, Pelagia. Willful, proud, independent, and beautiful, Pelagia finds herself between two men: Mandras, a handsome young fisherman, besotted with love for her but determined to permanently secure her love (and a dowry from her father) by finding "something to get to grips with" when he joins the resistance; and Captain Corelli, a charming, mandolin-playing, exceedingly reluctant officer of the Italian garrison that establishes the Axis presence on the island.

Corelli is thought slightly mad in his passion for music and the gentleness of his troops’ "occupation" of Cephallonia. Yet his madness quickly begins to make life seem more "various, rich, and strange" for everyone who encounters him – especially, and most confusingly, for Pelagia…

But with the arrival of the Germans and then of the Communists, life on the island becomes more chaotic and barbaric, more certainly a part of the process by which "history repeats itself, first as tragedy, and then again as tragedy." Pelagia’s life, once rife with possibility, an idyll of time, becomes a long search for something fine and lasting amid loss and separation, deprivation and fear. Her story of love found and changed and misplaced, and the story of the life she shares with the people of Cephallonia – a life permanently altered by the war.